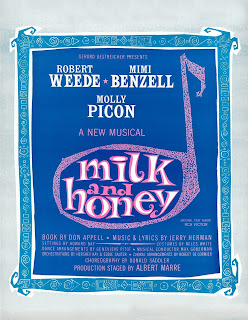 The plot: Phil Arkin is a middle-aged man who comes to Israel to visit his daughter and her husband; once there he meets an American tourist, Ruth, who’s traveling in the company of a group of widows from the United States, and they begin a love affair. But she discovers that he’s still married, although separated from his wife, and runs from him. He tries to find her without any luck, but finally she comes back to him. This time it’s him who doesn’t feel comfortable with the situation and they both decide to end their affair for now. Before she boards a plane back to the United States he promises her he’ll plea for a divorce and then they can meet again.

Musical Numbers: Overture - Shalom - Independence Day Hora - Milk and Honey - There's No Reason in the World - Chin Up, Ladies - That Was Yesterday - Let's Not Waste a Moment - The Wedding - Like a Young Man - I Will Follow You - Hymn to Hymie - As Simple as That – Finale