GETTING TO KNOW HIM 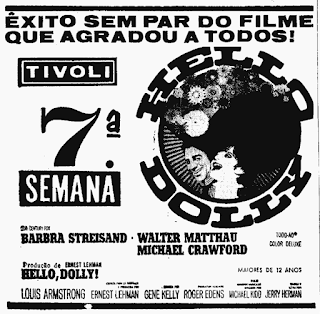 On the day of my 11th birthday my mother took me to the cinema to see the movie adaptation of HELLO, DOLLY! Unfortunately we arrived late and when we entered the dark room the opening credits were near the end, of course by than I didn’t knew that I’d miss the first number, “Just Leave Everything to Me”. I remembered that by the end of the “Put on Your Sunday Clothes” number I turned to my mother and told her that I wanted to see the movie again. And I did, several times!

Although many people seem to hate this movie adaptation, it still is one of my all time favorite movies. The first time I saw it I didn’t have a clue of who was Jerry Herman, but I fell in love with that glorious score and I desperately tried to find its original soundtrack, something almost impossible for someone living in Lisbon (I did find it several years later). When I was 14 a movie titled MAME open in Lisbon and I rush to see it. The fabulous score reminded me of HELLO, DOLLY! and so I noticed the name of the composer for the first time. His name was Jerry Herman and this is my way of thanking him for the joyful hours of music he gave and still gives me. 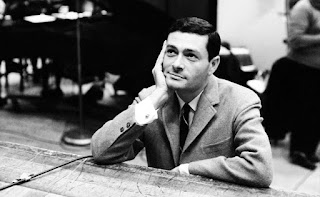 The year was 1931, the place was New York and no one would dream that a little boy born on the 10th of July would become one of the best composers & lyricists of the American Musical. His name was Gerald Herman, but the world would know him has Jerry Herman.

He grew up in Jersey City and by the age of six he was already playing piano, always under the tuition of his mother who was a professional piano teacher. After high school he moved towards a designer and architect career at New York’s Parsons School of Design, but on second thoughts he decided to take a theatre course at the University of Miami. It was here that he started writing stage shows and one of them, a revue entitled I FEEL WONDERFUL, was shown Off-Broadway, where it run for 49 performances. In the meantime he played piano at several New York clubs and wrote material for some well-known entertainers, like Jane Froman, Hermione Gingold and Tallulah Bankhead’s WELCOME DARLINGS. 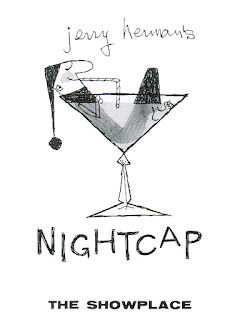 In one of those clubs, The Showplace, he convinced the owner to finance an intimate revue that he had just written. So in 1958 the revue NIGHTCAP opened and run for almost a year. One of those songs, “Show Tune”, would become one of his trademarks and was used again in 1960 Off-Broadway PARADE (and later in MAME and JERRY'S GIRLS). For this revue he not only wrote the music and lyrics, but he also wrote the book and directed it. The producer of that show, Lawrence Kasha, announced that he would produce Herman’s first full-scale musical, SPIRIT OF THE CHASE, but it never happened.

But in 1961 he had his first big book show opening on Broadway. MILK AND HONEY run for 543 performances and among its Tony Awards nominations there was one for Best Composer, the first of many to come. On that year he had another show opening Off-Broadway, its name was MADAME APHRODITE and only lasted 13 performances.

One day Jerry learned that producer David Merrick was planning a musical version of Thornton Wilder’s THE MATCHMAKER for Ethel Merman. He really wanted to write a score for it and was able to get a copy of the adaptation from its book writer Michael Stewart. During the weekend Jerry wrote four songs for the show and auditioned them for Merrick, who was impressed by his talent and gave him the job. Ethel Merman didn’t want to star on a musical by a newcomer and so Carol Channing replaced her. Later Merman did play the role. 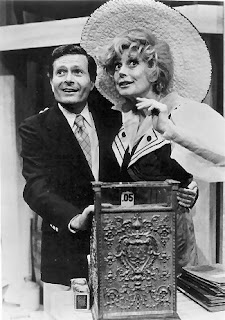 On the 16th of January, 1964, story was made on Broadway. It was the day that HELLO, DOLLY! opened at the St. James Theatre and, thanks to its 2844 performances, broke Broadways’ musical long-run record; today it still is among the top 20 biggest Broadway hits. Herman won his first Tony Award, Carol Channing became a superstar and the show won a total of 10 Tonys including Best Musical.

The title song was a hit in the voice of Louis Armstrong and the cast album sold 80.000 copies in the first week of release. A movie version of the show with Barbra Streisand as Dolly Levi became the number 6 at 1970 USA box-office and went on to be nominated for 7 Oscars, including Best Picture, and won 3.

Later the title song was subject of a plagiarism suit by Mack David, who said that the song was too similar with his tune “Sunflower”. Anyway the song remained on the score, a settlement was reached and it still is Herman’s most famous song. 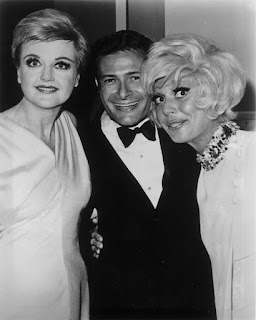 After that huge hit everyone was expecting something great from Herman and in 1966 he fulfill everyone’s expectations with another big hit, MAME. Angela Lansbury won a Tony for her leading role and so did Beatrice Arthur and Frankie Michaels in the Featured Actors category. Herman was nominated for Best Composer and Lyricist but he lost it for MAN OF LA MANCHA. Anyway MAME run for 1508 performances and the original cast recording won a Grammy Award. Unfortunately the 1974 movie version with Lucille Ball failed at the box-office.

In 1969, Jerry decided to turn Jean Giraudoux’s THE MADWOMAN OF CHAILLOT into a musical and the result was his first flop. DEAR WORLD, unlike his previous shows, was more serious and the audience, that was expecting something gayer as Mame or Dolly, didn’t catch it and the show closed after 132 performances. Even so Angela Lansbury won her second Tony Award. Regarding this score Herman said, referring to the title song, that “this is one of the only songs I’ve ever written that I wish I hadn’t”. 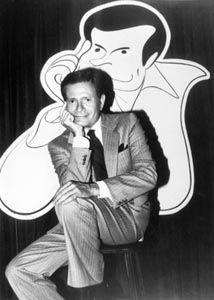 For his next show, MACK & MABEL, Herman wrote what many people (me included) consider his best score. Gower Champion, who had previously directed and choreographed HELLO, DOLLY!, was the director and choreographer and Robert Preston and Bernadette Peters were the stars.Expectations were high and the show opened on October 6, 1974, but it closed 66 performances later.

The show was nominated for 8 Tony Awards, but none of these was for Herman’s score (that year Tony for best score went to THE WIZ!!!). But thanks to its fantastic cast album the score became a cult favorite and it immortalized the show.

Although he was feeling kind of depress with the failure of his two last shows, Jerry was convinced by Michael Stewart, who wrote the books for HELLO, DOLLY! and MACK & MABEL, to turn Franz Werfel’s JACOBOWSKY AND THE COLONEL into a musical. The result was THE GRAND TOUR and it opened in 1979, only to close after just 61 performances, but this time Jerry got a Tony nomination for Best Original Score. 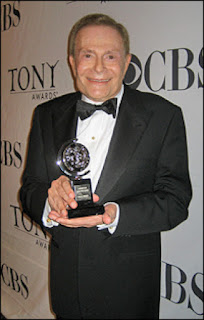 It seemed that the audiences no longer cared for his work, but he was determined to show everyone that he could still write a hit. Before that he wrote a couple of songs for the first act of a successful new musical, A DAY IN HOLLYWOOD / A NIGHT IN THE UKRAINE.

It was in August of 1983 that his new musical, an adaptation of a famous French play and film, opened on Broadway. LA CAGE AUX FOLLES was a smashing hit, running for 1761 performances and winning 6 Tony Awards, among them one for Best Musical and one for Best Original Score. With nothing more to prove to the public and the critics, Herman vowed he would never write another Broadway show.

Jerry’s detractors usually accused his work as being too commercial, to that he once respond. “Too commercial? What is that? I think being accused of too much commerciality is like saying the bride is too pretty. To me the ultimate compliment is being called commercial.” 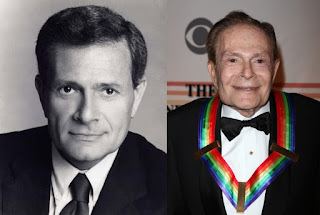 We had to wait 13 years to hear another Herman song. In the meantime a revue built around his songs, JERRY’S GIRLS, played on Broadway for 141 performances. But even facing some health problems he wrote the score for the 1996 television musical MRS. SANTA CLAUS, starring Angela Lansbury, and showed that he still had that magic touch. More recently he gave us the Las Vegas bound musical MISS SPECTACULAR and there’s no doubt that Jerry still has a lot of music to give us.

Once Jerry said “To me, the most important thing a theatre composer can do is write songs that audiences can leave the theatre humming. I call them take-home songs” and that he did! No one else of his generation wrote so many “take-home” songs and the new generation of musical composers hardly do that; the Broadway Musical is in a terrible need for someone like him. Anyway we’ll keep listening to his fabulous scores and hoping to see brand new revivals of his shows; the good news is that from time to time they are coming back to a stage, hopefully near you and me.

To end this kind of biography, nothing better than Jerry’s words written for the 1958 “Show Tune”: 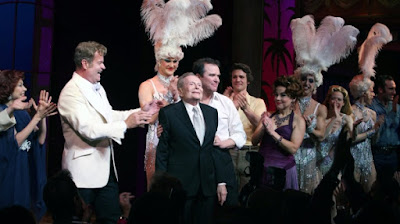 
Bibliography used for this site: “Jerry Herman the Lyrics – A Celebration” by Jerry Herman and Ken Bloom; “Broadway Musicals” by Martin Gottfried; “More Broadway Musicals” by Martin Gottfried; “Red, Hot & Blue – A Smithsonian Salute to the American Musical” by Amy Henderson and Dwight Blocker Bowers; “The Encyclopedia of the Musical Theatre” by Kurt Gänzl; “The Virgin Encyclopedia of Stage & Film Musicals” by Colin Larkin; “Not Since Carrie” by Ken Mandelbaum; Internet Broadway Database - Photos used on this blog by  The New York Public Library, Martha Swope, Carol Rosegg, Joan Marcus and others

To know more about him you can visit is official site at jerryherman.com
Posted by Jorge Tomé Santos at 2:20 PM

Email ThisBlogThis!Share to TwitterShare to FacebookShare to Pinterest
Labels: Getting to Know Him