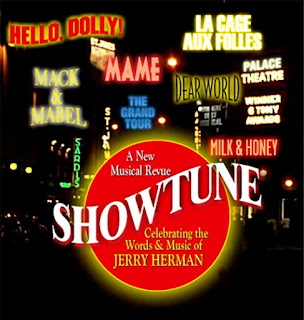 Music and Lyrics by Jerry Herman - Conceived by Paul Gilger

The plot: A musical revue celebrating the words and music of Jerry Herman. "The 40 Broadway songs featured in SHOWTUNE are juxtaposed into thematic scenes and song cycles, placing a strong emphasis on Jerry Herman's lyrics and his optimistic messages. The song juxtapositions also create sub-texts which give dramatic thru-lines to the show, making SHOWTUNE unique among musical revues. 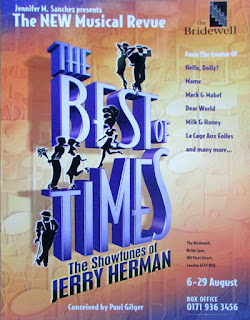 Conceived by California Architect Paul Gilger, SHOWTUNE premiered as the cabaret revue TUNE THE GRAND UP in 1985 in San Francisco.Subsequently, the revue was produced in London in 1998 by Jennifer Strome with a new title THE BEST OF TIMES, first at the Bridewell Theatre and then at the Vaudeville Theatre in the West End theatre district . In 2003, the revue, now titled Showtune, opened off-Broadway at the Theatre at St Peter's Church. Once again it was produced by Jennifer Strome and in partnership with film producer David Brown. SHOWTUNE is licensed by Music Theatre International in the United States, by Josef Weinberger in England, and by Hal Leonard in Australia." in Wikipedia